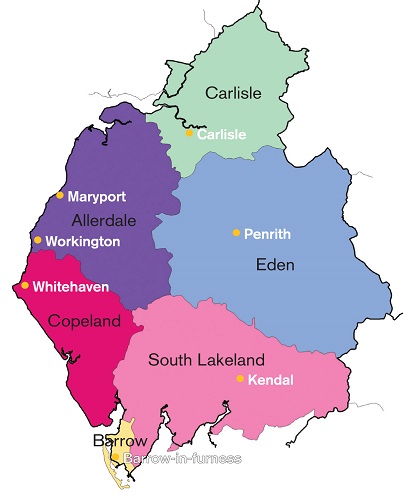 Four plans for the devolution of Cumbria

In early July 2020, the Secretary of State for Housing, Communities and Local Government contacted all Cumbrian local authorities to discuss local government reorganisation, asking for outline thoughts in early September.

On the 9th October, the Secretary of State then wrote to all the principal authorities to formally ask them to submit proposals for local government reorganisation in Cumbria. The deadline for receipt of proposals is Wednesday 9th December 2020.

The submissions are still in outline with more information to follow, and there is more than one option being put forward for each principal authority area of the county.

The proposals submitted to government are the four options below:

1. Cumbria County Council is proposing one unitary authority covering the whole of Cumbria

The government will now consider these proposals and respond to the principal authorities at some point in 2021. When an option has been agreed by government, there will be formal consultation with communities, including parish and town councils.

Each of the plans is presented individually on the MWPC website